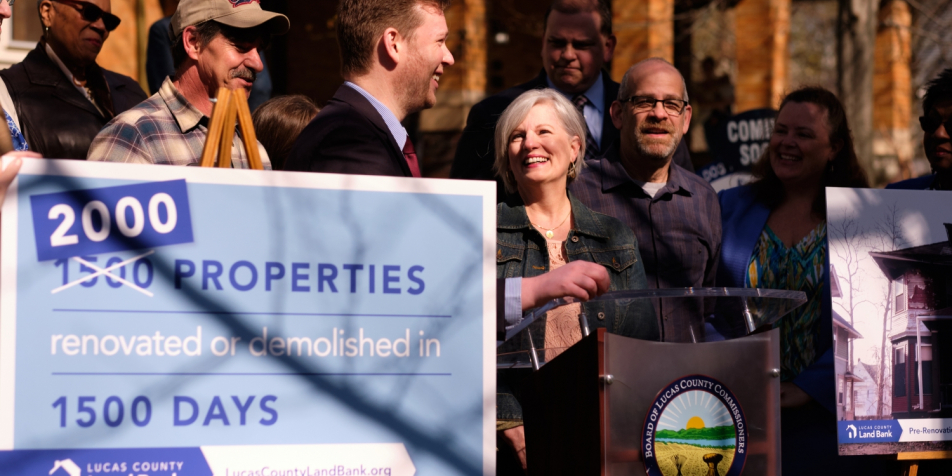 That was the theme from leaders of the Lucas County Land Bank as they announced that their goal to renovate or demolish 1,500 properties in 1,500 days, begun in summer 2016, has finished 500 days early. Standing in front of a beautifully restored home in Toledo’s Old West End neighborhood, those gathered made clear they weren’t finished and that another 500 properties would be tackled before the deadline.

“There are very few times when an organization finishes a goal this massive this early, but that’s exactly what the Land Bank has accomplished,” said Mayor Wade Kapszukiewicz, who serves as the Chair of the Land Bank’s Board of Directors. “And even better – before we complete these 1,500 days, we now hope to renovate or demolish a total of 2,000 properties.”

The news conference was held in front of a home on Glenwood Avenue that the Land Bank took ownership of due to tax delinquency in 2017. Sold to Kathi & Gary Taub – who live next door – and Wanda & Larry Tibai for $1,500 shortly thereafter, the couples invested thousands of dollars to turn the once blighted home with boarded windows and falling gutters into one of the best looking homes on the block. The ownersintend to list the property for sale in the coming weeks and bring a new homeowner to the neighborhood.

“The Land Bank could not have reached the goals we’ve set without the blood, sweat, and tears of neighbors like the Taubs and Tibais,” said David Mann, President & CEO. “Whether someone buys a home from us to renovate or takes control of that vacant lot next door after a demolition, it is residents who are slowing bringing back our neighborhoods.”

In the past 1,005 days, the Land Bank has seen 222 homes and business properties renovated with another 184 in progress. In addition, 1,284 blighted properties have been demolished. This work has been accomplished largely due to a $29 million commitment by the Ohio Housing Finance Agency and the United States Department of Treasury from the Hardest Hit Fund. The Lucas County Land Bank’s award is the largest per capita in the State of Ohio.