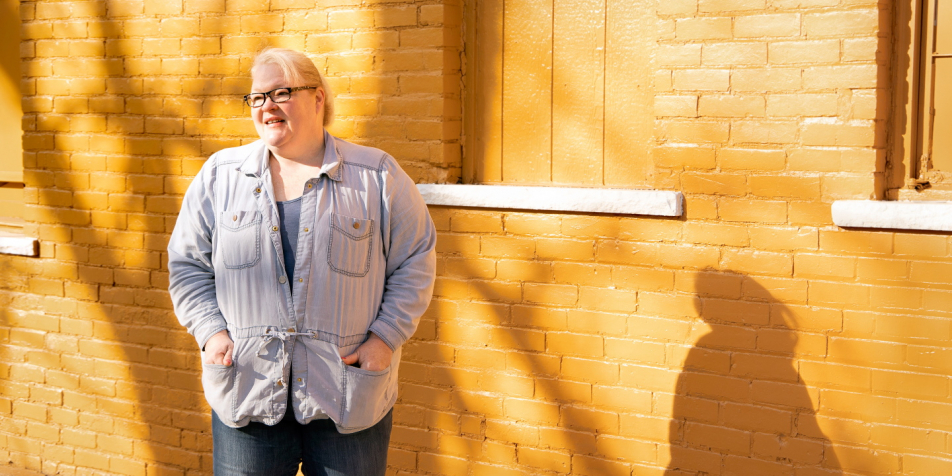 East Toledo has a special place in the Land Bank's work.

We've been able to accomplish more renovation projects in the 43605 zip code than almost anywhere else in Lucas County. From Oakdale to Ironville, and every neighborhood in between, East Toledo matters. The following is a recent interview with Tracey Britt, an officer with the Toledo Police Department and East Toledo resident, who believes in Birmingham and is working to make a difference with the Land Bank's help.

Hi Tracey. Thanks for talking with us. What is your connection to East Toledo?

I thought my connection to East Toledo began when I became a TPD officer; little did I know, my dad's childhood home was in the 2200 block of Greenwood, and my grandfather and great-grandfather (who both passed before I was born) had an automotive service shop and wrecker service at the corner of Navarre & White Street. I guess you could say I was an 'East Sider once removed'. My real love for East Toledo began when I went from being a patrol officer to a Community Services Officer assigned directly to East Toledo, and that led to me jumping in and moving into the neighborhood I serve.

How long have you served Toledo as a police officer?

I have been a TPD Officer since 1994, and I have been in Field Operations for my entire career. I spent 16 years on midnights in a wagon in the North End and East Side. When I bid to day-shift in 2014, I learned very quickly that the darkness of night time covers a lot of ugly. The neighborhoods I patrolled at night looked awful in the light of day. I saw so many vacant houses and empty commercial buildings. I saw so much more litter, damage and blight... it was depressing. I decided then that I wanted to help change that, and I figured the best way for me to do it was to become a Community Services Officer. My job is a combination of law enforcement and community outreach. I have been a CSO for East Toledo since April of 2014 and it was the best move I could have made.

What made you interested in buying and renovating 2126 Consaul?

2126 Consaul was part of my district; it is situated in the main corridor of Consaul Street in the Birmingham neighborhood. The building was built in 1906 and began as a grocery. Over the years it passed through many hands and went from being a mixed-use business and residential building to being apartments. Sadly, it was also the site of a homicide and a fire. The building was then abandoned and there it sat: empty, damaged, tax-delinquent.

I was familiar with the work the Land Bank was doing to revitalize neighborhoods, so I submitted a request. In time, the Land Bank acquired the building and listed it for sale, but had no serious offers. I believed that the building still had 'good bones' and that it would be a shame for it to be torn down. Once buildings like that are torn down, they are lost forever, and they just don't build them like that anymore. So I decided to come up with a plan and make an offer.

We're really glad you did! What has the renovation process been like?

The renovation process has been eye-opening, both frustrating and rewarding at times, and very educational. It has taken a considerable amount of work to get the building emptied. 12 thirty-yard dumpsters to be exact! There have been many hands who have worked on the demo with me, and I am grateful to so many, including James, Sarah, Angela, Kelly, Laura, Pauly, Sharon, Charles, Andrew, Zach, and Eddie. Almost ALL of them are from East Toledo, and most are from Birmingham.

We have begun on the outside improvements, removing an old deck, a covered porch, installing new windows in the upstairs, and giving it a fresh coat of paint. The next step will be interior framing, new electrical, new plumbing, new HVAC, and new finishes. My fingers are crossed for approval of a zoning change so that this building can go back to being both residential and commercial.

What will bringing this building back to life mean for Birmingham as a neighborhood?

The current plan for this building has 2 two-bedroom apartments upstairs, and 2-3 business suites below. Putting this building into use creates two homes and adds more activity and vitality to the block. It is my hope to draw more business into the neighborhood and to offer budding entrepreneurs an opportunity to 'set up shop'. The first floor of the building has approximately 2400 sq. ft. to develop. Art studio? Hair salon/Barber Shop? Office space? Nail salon? Coffee shop? The possibilities are endless.

The possibilities are truly endless. What would you say to someone who is thinking of taking on a project with the Land Bank?

Throughout the entire process, the Land Bank has been WONDERFUL to work with. Each time the project hit a snag, the Land Bank team was right there to talk through it and make adjustments. I am NOT a developer or remodeling professional, so I have made some rookie mistakes. The Land Bank has helped me work through them and I am confident that although slow, this project will make it to the finish line.

For someone who is thinking of taking on a project with the Land Bank, I would say GO FOR IT!